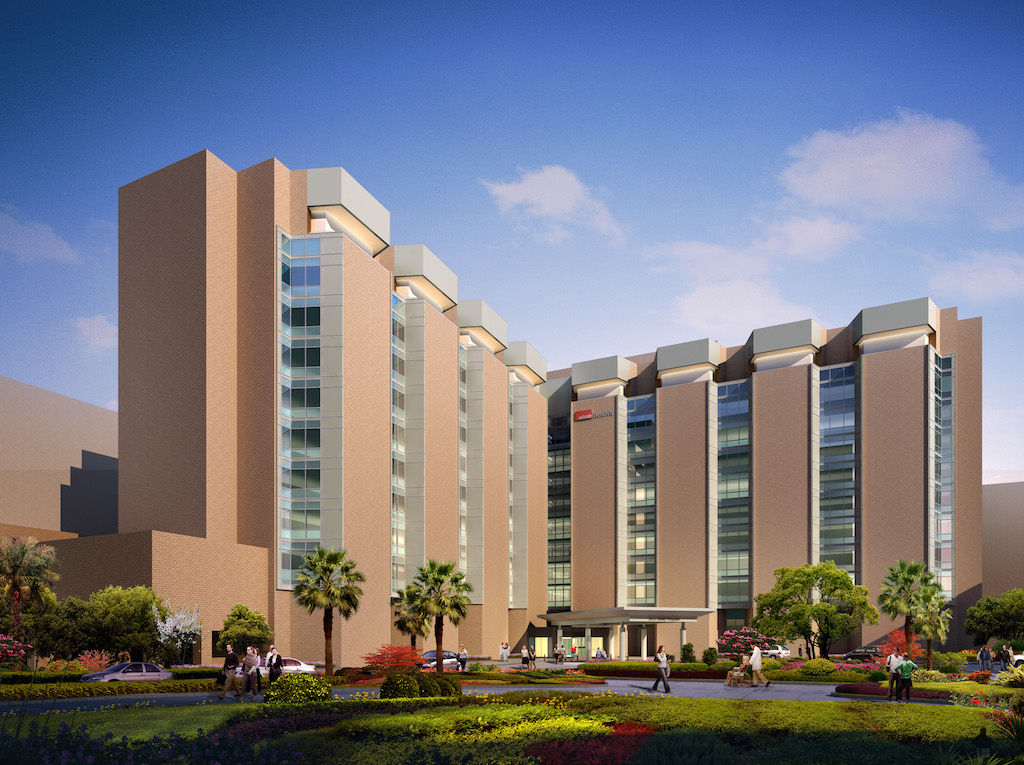 When the second phase of the John Sealy Hospital modernization project is finished in 2020, the facade of the towers will look similar to Jennie Sealy Hospital, complete with gleaming glass running the building’s length and new brick to match the hue of the newest arrival to the Galveston campus.

That’s just one of the many improvements being made as part of the $135 million project to completely refurbish the hospital, said Mark Smith, principal facilities project manager for UTMB Design & Construction.

In addition to a revamped appearance, patient rooms in the two towers will be expanded in size and finish comparable to the new rooms in Jennie Sealy Hospital – from the floors to the ceilings and wall coverings – and the infrastructure updated to support the latest technological advances.

Smith said the opening of Jennie Sealy Hospital on April 9 cleared the way for construction to begin at the John Sealy Towers.

While many of the adult patient services were moved from John Sealy to Jennie Sealy Hospital with its opening, the world-renowned Blocker Burn Unit, Mother & Baby and Labor & Delivery Units, the Children’s Hospital, UTMB’s Blood Donor Center, the Sleep Lab, Café on the Court cafeteria and various other services will remain in John Sealy Hospital.

However, Smith said all services would begin moving from the AB Tower to the CD Tower in October so that remodeling work can begin on both the exterior and the interior of AB. That work is expected to take 18 months and once it’s complete, all patient care and support services will be moved to AB Tower so that the same work can be completed on the CD Tower.

“It’s a very complex project with a lot of moving parts,” Smith said. “Obviously, a lot of our visitors and staff are affected as we ask them to circulate around construction areas. But, when we get to the end, the hospital is going to be a beautiful place.”

The former hub of UTMB’s inpatient care complex, the current John Sealy Hospital was completed in 1978 at a cost of $32.5 million, funded completely by The Sealy & Smith Foundation. The 12-story hospital includes single patient rooms and a multitude of specialized care units. The Sealy & Smith Foundation has contributed $75 million to this phase of the modernization project.

The first phase of the John Sealy Hospital modernization project was completed after Hurricane Ike and included renovating and upgrading many patient rooms in the CD Tower – particularly those on the second, third, seventh and eighth floors.

Smith said that ultimately completion of the second phase of the John Sealy Hospital modernization would enable UTMB to provide exceptional care to even more patients.

“I think the key to this portion of the modernization is it will greatly expand UTMB’s Women’s, Infant’s and Children’s capabilities and give us even more of a world-class facility to care for our patients,” he said. “This will be a tremendous asset to the patients and staff here when it’s complete.”
Back to UTMB Construction