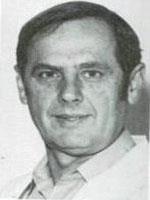 The annual lectureship in honor of Dr. Bohdan R. Nechay was established in the Department of Pharmacology & Toxicology in 1999.  Professor Nechay was born in Prague, Czechoslovakia, and received his doctoral degree in Veterinary Medicine from the University of Minnesota, School of Veterinary Medicine  in 1953. His postdoctoral education included NIH and American Heart Association fellowships at the University of Florida, Gainesville, 1959 - 1961. His first academic position was as an Assistant Professor at the University of Florida from 1961 to 1966. He was associated briefly with Duke University, Department of Pharmacology and Urology. He arrived at The University of Texas Medical Branch as an Associate Professor, then Professor, in The Department of Pharmacology and Toxicology, where he remained for the rest of his professional career. He was a Visiting Scientist at the University of Uppsala in Sweden in 1965, and again in 1972. Dr. Nechay's research and teaching interests were focused on renal physiology and the nephrotoxicity of heavy metals. He published exclusively in pharmacology/toxicology journals, and nearly half of his publications were in the Journal of Pharmacology and Experimental Therapeutics. He participated in the Summer Faculty Fellowship Program at NASA in 1988 and 1989. His professional affiliations included memberships in the American Society of Nephrology, Southern Association of Toxicologists, Society of Toxicology, and Sigma Xi, as well as the Southern Salt Water, Kidney Association, and the Lions Club.